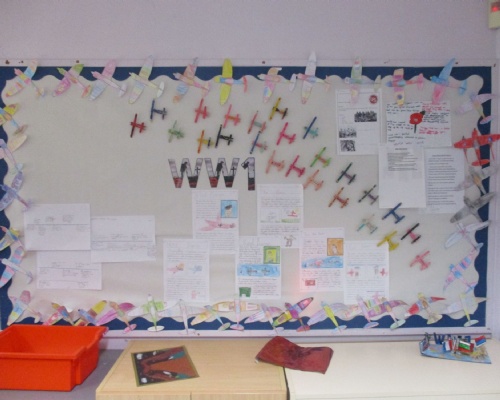 This week in Sapphire class we have completed a range of activities based on WW1 as it was a 100 years ago.

Here are some of our facts we learnt about

Raynie - I didn't like being in a trench as you will have to sleep with rats and in mud.

Gioia - If we were in a trench we would have to eat horrible food.

We have also looked at a range of planes that would have been used in WW1 and we got to make our own models. We found out that planes had symbols to show where the planes came from. British planes had a red dot and around that a white then blue ring.

We have also been researching  people in WW1 and as a class we researched about the Red Baron. We found out that his real name was Manfred von Richthofen and he was born in Germany. He was famous for being the best pilot in his red plane and killed about 80 people.

We have also pretended to be soldiers and how they would march to get from location to location.

Lacie - I have enjoyed going into Trenches and how cruel it was.

Oliver - I liked that we learnt about the Red Baron because we got to find out loads of facts about him.

Jacob -  I enjoyed making planes and dressing up as a WW1 person.