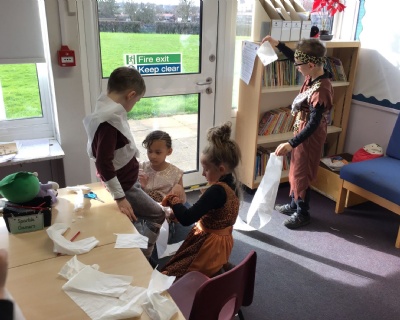 We had a great WOW Day, creating costumes and looking at all the things we have learnt!

Sapphire class have had a great WOW Day this week! We dressed up as people from the Stone Age and created lots of crafts and designs based on the facts and information we have learnt. One of our tasks was a team-building activity where we had to create a costume from the Stone Age using just toilet roll and some tape! Some groups were very observant and noticed that the bottom of outfits were often cut into triangles or looked like they have been ripped, rather than cut neatly. Some groups used long trails of paper, some used tiny pieces and some were very neat with their wrapping!

We also had a speed stacking tournament in the hall led by some year 5/6s. We did very well and now have personal records to beat next time!